In 1917 the Dekker family, then based in Axel in the Dutch province of Zeeuws-Vlaanderen, started exporting horses. The export business soon expanded to include beef cattle, initially bulls, and then pregnant heifers, which later became the main focus of the business. In the early years, exports were directed to countries within Europe as well as North and South America. With the arrival of new reproduction techniques, such as AI and later embryo transplantation, in the 1960s a start was made with marketing genetics.

At the start of the 1980s, the business ventured across the Atlantic and opened a branch in the USA, initially in Gaithersburg (Maryland), later in Madison (Wisconsin). From here the company exported cattle, but the main business concentrated on purchasing genetics for sale to various AI organisations in Europe.

In 1988 the company decided to relocate from Axel to Zwolle. This coincided with an intensification of its collaboration with AI organisation Genes Diffusion, based in Douai in northern France. In 1992, this resulted in the takeover of all ‘Dekker’ offices in the Netherlands, Germany and the US. The name "Firma Dekker” was initially retained, but was later changed in line with other offices: Genes Diffusion B.V.In 1995 the office moved from Zwolle to its current site in Ommen. 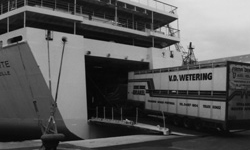 In 2007 also the French livestock exportactivities of Genes Diffusion was taken over by Firma Dekker. Firma Dekker founded its own establishment in Bégard, Brittany called Firma Dekker France.